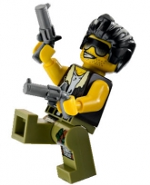 Fact File:
Name: Frank Rock
Hometown: "I live on the wild side"
Strengths: Wears his sun glasses at night and never backs down from a brawl
Achievements: Saving the world from eternal darkness
Hobbies: Breaking the rules and walking away from explosions without looking back at them
Arch- enemy: Swamp creature


Frank Rock is a minifigure from the Monster Fighters theme that was released in 2012. He appears in two sets, 9461 The Swamp Creature, and 9467 The Ghost Train.

Frank Rock was a motorcyclist rebel, who went out looking for his missing dog, believed to be abducted by slimy ghouls, and set his revenge on the Swamp Creature.

Go back to find the other Monster Fighters...